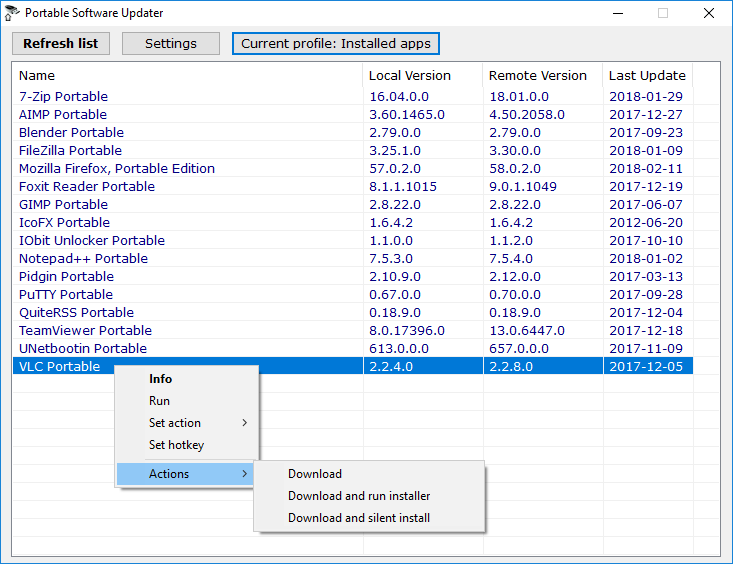 As its fans surely know, Portable Software Updater stopped working a while back - not because of an actual bug in the application, but a switch in the way software was updated using the PortableApps.com platform/launcher: a switch from plain text to an archived text file. Obviously, this new release fixes that simple problem and a few other minor issues.

However, fixes aside, there are some important changes in this release that should really be mentioned. First of all, I've decided to move one feature under the Extras umbrella: automatically killing apps during silent installs. There were two reasons behind this switch: 1) forcibly killing apps is not a feature that should be accessible to anyone - to be honest, I consider it too dangerous and I've only made it available because it was demanded - so I'd like to restrict the number of people using it a bit; 2) killing tasks isn't as easy as it sounds. Well, to be clear, killing a process is easy, but keeping a record of each app's process name is definitely not easy.

Keep in mind, PortableApps.com now features over 400 apps. That's over 400 process names that have to be checked. Each time they release a new app, its process name must be added to Portable Software Updater's internal database if it doesn't match the standard pattern (notepad++portable.exe, for example). When I've decided to launch Nozavi's Apps again, I've also realized a move from lifetime to yearly donations has to be made just for cases like this one, where an extra can't just be used indefinitely and requires my constant attention.

As with most new versions released with the new website, Portable Software Updater also supports Unicode, so you're no longer restrained to ANSI characters when naming your profiles, for example.