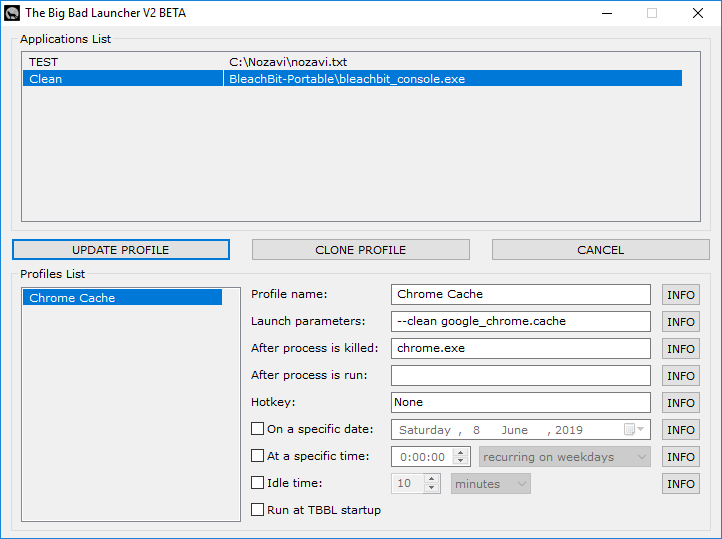 The Big Bad Launcher has received little to no attention since its launch, although I had far more my intentions for this app than its current version (thus the app's...presumptuous name). However, the state in which I left it always frustrated me, so I've recently decided to have another go. Be advised, this a completely new release - in that, it has absolutely nothing to do with the old version: it was written from scratch and coming from a completely different direction.

Therefore, version 2 of The Big Bad Launcher will be launched and listed separately, because - in its current form - it offers none of version 1's major features. I do plan on adding them very soon, of course, but those features are no longer the focus of the application.

Version 2 offers far more options for launching your apps. A menu or a window? No, no. Think hotkeys, dates, times, idle time and even process-triggered. If you have any suggestions, please feel free to send them over via the Support area and I must give anything a try.

As always, The Big Bad Launcher is fully portable. Nothing is stored in the registry and its settings/database are stored in the executable's folder. Moreover, you'll be able to define apps using a relative path, so placing the launcher somewhere on your apps drive/folder will make it easy to launch apps from even after re-installing Windows (or from a USB thumb).

For now, the app will only allow you to launch files, but I also plan on supporting presets, so you can easily access special locations, like Control Panel, Recycle Bin and so on - I'd rather not go go into details right now, since I'm not sure how many preset types will be supported.

Enough said, in the coming weeks The Big Bad Launcher V2 Beta will be available in the Downloads area. Meanwhile, the sneak peak above will have to do.